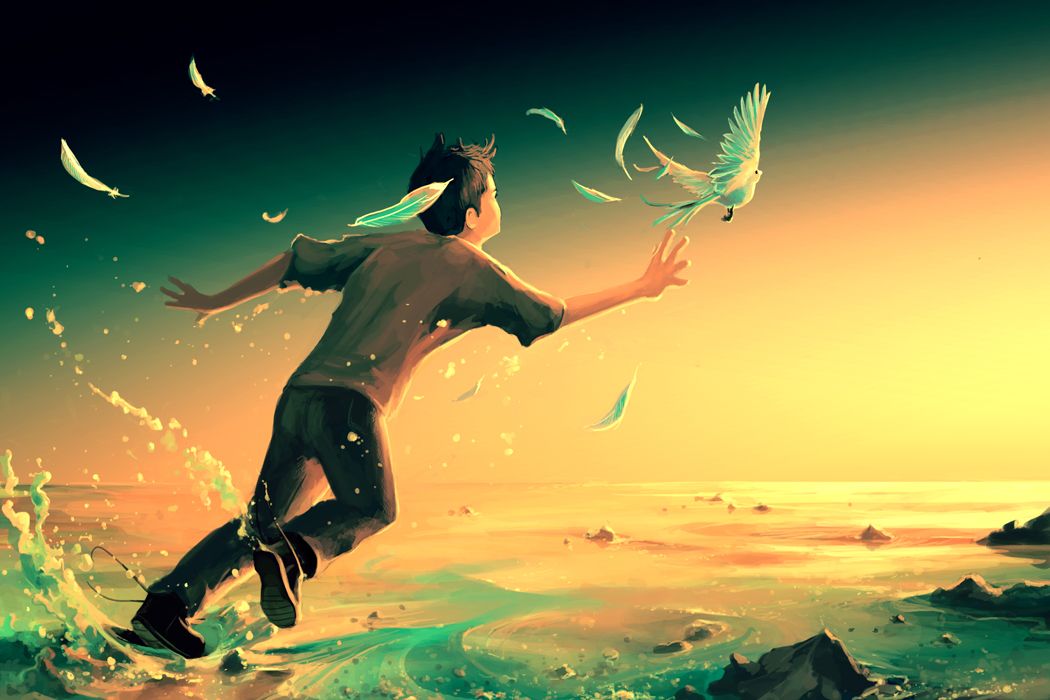 Although my website is nominally a “music” website, there is something deeper that comes with it—some source from which the music arises and is inspired by and to which the music gives voice. I don’t mean talent, practice, or compositional prowess. I’m referring to a far deeper well. The one whose waters rise up and out of your eyes lending the conscious “I Am” to your flesh.

It’s a curious circumstance that there are those who, in full and undeniable sight of their own “Am-ness” nonetheless cling to the fantasy that this arises from the countless neuronal impulses zipping through their brains and bodies—that the “illusion” of being alive is just that: an illusion arising from a system of lifeless matter that performs this sleight of hand through sheer complexity.

As a mathematician and scientist, I know firsthand that breaking through to a new level of understanding comes about when ancient and fossilized prejudices are shattered. But before they can be shattered they must be recognized, and this is a far reach for the vast lot of humanity. Things that were whispered to us in childhood, “truths” that just seem obvious, and conceptions that are just that—maps of reality rather than reality, itself—these are the Potemkin villas of a comfortably numb life. And the human heart, its heroic demonstrations of mercy and compassion notwithstanding, is a hard, hard substance addicted to both comfort and numbness.

When prejudices are recognized and then questioned—when deep and subconscious beliefs that form the very core of our existence are exhumed for honest examination, then too is the façade of reality made visible. It’s like returning to a child’s ride at Disneyland as an adult and marveling how in our childhood innocence we had so easily believed the props and lights a mere meter below to be grand, twinkling cities and magical lands far beneath the sea of stars in which we flew.

The nature of our true existence and what follows this mortal coil is a deep and ineradicable quest of the human spirit. Despite the fact that no one will dare mention it at work. Despite the fact we are bullied by political correctness into “keeping it to ourselves.” Despite the fact that the surest way to lose all credibility and face with friends and acquaintances is to talk about anything deeper than the latest iDrug. Somewhere in that hard, hard heart still pulses our supple and vibrant true nature. After the working hour in the failing light when we are alone, our inner Buddha peaks cautiously out and whispers the eternal question.

If I may offer one extremely pivotal key to this mystery—one vantage that can flip the entirety on its head and thereby utterly transform understanding—it is this: Do not ask how matter (the brain) can give rise to consciousness (the inner feeling of being alive). Ask instead how consciousness can give rise to matter. Do not ask how material causes can produce perceptual effects, for the question is backwards. We live in an electromagnetic field of energy that masquerades as matter. Our physical brain does not produce thought and feeling, but rather is a transducer of a priori thought and feeling into physical manifestation. This is much as it is in the case of radio. A radio does not produce the shows and songs one hears; it transduces them from the wave-filled ether which they already inhabit along with thousands of other wave-packeted energies. Likewise, the events witnessed in the material realm do not create the motivations that drive them or the satisfactions that follow. Quite the opposite, as is easily verified by a moment’s reflection. Cities are built, airplanes fly, and trains run as a result of the thought that first expressed a desire they do so. Thought creates reality.

Expressed more generally: Spirit is primary. Matter is spiritual condensate. This is thoroughly in contradiction to the core prejudice that nearly all of us absorb into our psyches very early in life. It flies in the face of the atheistic materialism modern foolishness is founded upon. But this foundation is crumbling and will soon entirely collapse. Despite the censoring by our technological overlords, Google, Facebook, Apple, et al., there are signs that more and more of humanity is awakening. It is doubtful that this can be stopped in spite of the awesome and enormous mass of authoritarian tyranny committed to snuffing and then burying it.

I don’t put this forward as a matter of faith. As a mathematician and scientist I am interested in truly understanding and knowing at the deepest levels—not inventing doctrine. I want evidence, and the evidence is abundant, first and foremost in one’s own experience: You exist, not as a blob of skeletally supported goo, but as a felt consciousness. There is something alive inside your body that is not your body. Elementary and obvious…and altogether ignored by most. You say you don’t believe in life after the body’s passing, yet you are a statistical experiment that has yielded a 100% confirmation rate to that very proposition. You think that you live briefly, suffer much, then die—forever?! Yet you were already dead before you were born—forever! And still you just popped up one day and here you are! One experiment, one success. That’s a 100% confirmation rate.

But maybe such evidence appears as mere semantic sleight of hand. It is too close to reach out and grasp, much as with the fisherman catching minnows while standing atop a whale. Other evidence abounds. How could it not, as truth expresses itself holographically in every corner of existence. Numerous people have experienced the realm beyond this and have retained not only the knowledge of their “near death experience” (NDE) but also its felt reality. For many years—decades—afterwards! It is an experience that defies the “use by” date of most memories and remains fresh to the point of bringing tears to the eyes of those who recount them.

The depth of NDEs varies, but certain elements occur often across the spectrum. Feelings of absolute peace, separation from the body, and communication with other beings are common. A life review in which not only are events seen but also felt from multiple perspectives simultaneously happens often. Sometimes the choice of whether to return to earthly life or to remain is offered, along with a depiction of what would likely happen in both cases. Most people return to this life as changed beings for the better. Sometimes psychical gifts are imparted, and they are not always welcome. One near death experiencer gained the ability to hear people’s internal conversations. She found it most unpleasant, as many people entertain anxious and depressing thoughts. Would you like to be flooded with such conversation on a daily basis? A belief in God or in some spiritual existence often replaces prior staunch atheism or strengthens and reshapes belief.

But, jp, how do you know that these aren’t anything other than illusions and hallucinations? After all, drugs can produce grand effects and cause people to hallucinate that they are talking to the Christ or even God. And this is an excellent question. People like physicist, Neil deGrasse, and researcher, Susan Blackmore, offer the explanation that these experiencers never actually die. Instead, their brains release endorphins, which accounts for the peaceful feeling, and the light-sensitive cells of the retina shut down from edges first, accounting for the oft-reported tunnel of light. “And where do many of these NDEs occur?” asks Mr. deGrasse. “In a hospital while lying down on an operating table. And what is usually above an operating table shining down upon them? A bright light!” And thus the mystery is explained, or at least we may be confident that these opening shots are the beginnings of a complete understanding through further plausible reasons that apparently no one else had the mental acuity to make.

But the devil is in the details. Upon further handling, the veneer of plausibility is easily scratched and ruined by facts that are extremely difficult to package in the made-to-order story of the old paradigm. Like the case of Pam Reynolds. She had an operation for a brain aneurism in which her heart was stopped and the blood was drained from her body. Earbuds delivering loud periodic 100+ dB bursts of sound (to verify brain non-response) were inserted into her ears and taped over. Pam proceeded to have one of the most profound NDEs recorded in which she saw and heard many details about the operation and later accurately recounted them. She described the tools used and the conversation between the doctor and nurses. And no, she had not seen the tools beforehand or seen them out of the corner of her eye at some point. They were covered until she was all the way under and were covered again before she was awakened. Throughout the surgery she had no blood in her brain and indicated no neural response to the mechanisms that checked for this, yet she heard and saw everything.

Or the case of George Rodonaia who was killed by the KGB (or so they thought). He was dead enough to be sent to the morgue, where he remained for one day before awakening right as his autopsy was beginning. His was a deep and intense experience in which he traveled throughout the hospital and communicated with a baby who would not stop crying due to a broken arm. No one knew this, and yet, after George awakened, he told them and they, indeed, verified and cured the baby’s broken arm.

Or the case of Anita Moorjani who fell into a coma after a 4-year struggle with cancer. In that coma she witnessed her brother board a plane from India to come pay his last respects. She saw her family gathered in a completely separate room of the hospital, mourning her imminent passing. But she didn’t pass! She awakened and proceeded to completely heal in the fantastically short time of two-three weeks. Her doctors were absolutely amazed, yet they could find no trace of the cancer and even cut her therapy short.

How do you explain such things by saying it was the bright hospital lights or endorphins flooding the brain? You can’t! For people who don’t want to believe or even consider, they will always simply discount everything. “No, it never happened. It’s just made up. If it were real, everyone would know about it.” Really?! So if the world were really round instead of flat, people would know? Why didn’t they? And if leeches were just medicinal quackery, everyone would know? Then why didn’t they? And if the earth weren’t really the center of our solar system, let alone galaxy, then everyone would know? Why didn’t they?! The real quackery is the conventional wisdom handed down by the fossilized institutions of medicine and health, like the FDA, CDC, and AMA, we elevate to demigod status. People are easy to fool because people want everything to be easy, to be free, to require no thought, to be neatly packaged and predigested so they never have to learn how to graduate from infant’s pabulum.

If you are interested in this topic—and you should be—then below are some good references. You can also watch my favorite NDE cases here. You’re not going to be in this realm forever. However, you are going to be somewhere forever. Shouldn’t you have some interest in where that’s going to be, considering forever is a really long time?